Have you seen the very inappropriate, non-politically correct, 80’s movie I’m Gonna Git You Sucka? In that movie we learn a true hero brings his own theme music, he also wears platform shoes with goldfish in them.

Just as any hero should bring his own theme music, so should a stalker. If I was stalking you this is what might be playing…

Rockwell’s Somebody’s watching me because, well I would be watching you.

Little Monsters’ Little Talks not only is that song kind of creepy it makes me think of Patrick Swayze in Ghost stalking Demi Moore. Since I want Demi’s hair and a side of Patrick back then wouldn’t be a bad thing, I would definitely stalk you with Little Talks. 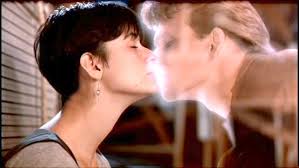 Miranda Lambert’s Crazy Ex Girlfriend. You leave me, I stalk you. If that doesn’t work…I wouldn’t give it a second thought to being thrown in jail. Because to a hammer everything looks like a nail.

Skid Row’s 18 and Life because once I was arrested for any of the above that might be what I am looking at.


Stalker songs: You might think I am a stalker but you just don’t know how much you love me. A Twisted Mix-Tuesday brought to you by two lovely stalkers, Jen and Kristi. Be sure to visit them and share the twistedness.

Oh and when you go over to check them out you will see that I once again chose the wrong week to comment about. Yes, I am a blog-hop idiot.  So I posted about yard work instead. Then I contacted Kristi to tell her I wrote this awesome post but couldn’t use it. Especially since it was a topic from about 10 weeks ago.

But she gave me the blessing to post it anyway. Not so much a blessing but a demand. So here I am and now…


Now summer has officially arrived, I am going for a Twisted Lemonade.