It’s Throw-back Thursday.  This post was originally published on 06-SEP-2012 after a wonderful week of company. But then I became an idiot. Instead of being warrior mom I was one who judged. A person I wasn’t too proud to be. 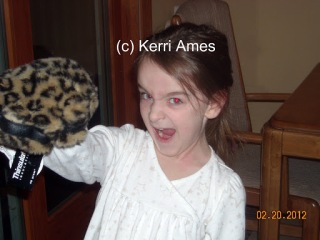 This past week was wonderful. We had a house full of company for the long weekend, Allie is exhausted from all of kids. She (and Boo) had a great time playing with their cousins, the ones that are their ages and the ones that just act like it.

It was a hard weekend for me and not just because I did 15 loads of towels! I know Boo is delayed, that she will most probably be labeled “intellectually disabled” within the next couple of years. She has made such gains this summer in the new special-ed program and I am so proud of her.

This weekend I was taken by surprise to see just how far behind she remains. As Allie and her cousins ran around the yard, played on the bounce house, climbed all over the playground Boo tried to keep up. She really did. She was so excited and squealing. But every time she got close…ZOOM they were off in another direction.

It was great for Allie. She got to play with kids who could keep up. She ran around the amusement park with her Uncle and got to go on all the rides (poor husband was working!). Boo was content to sit in the stroller and watch them have fun.

Boo was fine. Allie was fine. I was guilty. Because instead of seeing all the gains Boo has made, I saw her flaws.

I saw Boo not catching up.

I saw people not understanding Boo’s efforts when she tried to communicate.

I saw Boo not being able to jump on the bounce house.

I saw Boo getting overwhelmed when we went to the playground that had sand surrounding the play structure.

I saw Boo not  being able to do things a typical 3YO can do. Things that her cousin (who is 3m younger) did without any difficulty at all.

Although, Boo was MUCH better behaved in the restaurant 🙂

I feel horrible.  I feel guilty. I feel like I let Boo down.

I admit to having high expectations for Boo. When they said she wouldn’t walk, I got her more therapy and a pediatric walker. A year later she walked. I have always set reasonable (in my mind) goals for Boo and never felt that as a mom I was short changed.

I have never looked at another child and was envious. I have felt that it wasn’t fair that Boo had to work so hard. That I would look at other parents and cringe when I heard them complain about their toddler getting into things. I would think to myself, if only!

But until this weekend I never looked at the other children and held Boo up to their level of development.

I have always looked at Boo and been proud. Sure I’ve been embarrassed (like that time in Church) when she acts up in public. But I’ve always been able to rationalize that those staring didn’t know Boo and could kiss my right cheek.

But this weekend, I was one of those idiots who judge my daughter.