Having friends that have sons rather than daughters I can attest that raising girls versus boys are different experiences. Parents, like my own, that raised each gender tell me that raising their boy-child was/is different than raising their girl-child. All camps would probably agree that the grass is way greener on the other side. Well, if we could see the grass. 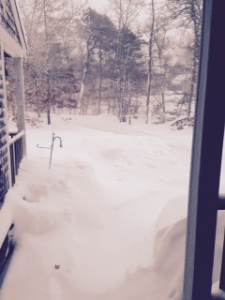 This is Cape Cod people! Where’s the beach?

While I am raising girls, I am unsure if I agree that I am raising them to throw like a girl or to buy into girl power. Truthfully I am not even sure what girl power means anymore. I believe in the definition of feminism: “The advocacy of women’s rights on the grounds of political, social and economic equality to men”. I want my children equal to men.  But I also want them equal to other women. The truth is, all women are not equal. Compare:

Should the stay at home mom expect less from her husband than the working mother who is out of the house more than she is in it?

Should the woman who takes time off for maternity leave, snow days, school events, sick children and whose commitment to her family supersedes that of her company be paid the same amount of the single woman who arrives early, stays late and can commit all of her energies to the company?

Should the woman who went to college and obtained her degree make more or less than the woman who started at the company at the ground floor and successfully rose up the ladder?

THIS type of discussion we can usually have without it degrading to a she against she (okay, given the mommy wars maybe not. But in my circle, yes we can!).  It’s when you put the man into the debate that it becomes the battle of the sexes. The truth is, David works a lot more than I do. Even though we both have full-time jobs, when it comes to taking time off to care for the children it falls to me. It wasn’t something we did deliberately but organically evolved. Mothers (generally) take three months off of work for each child and others at the office may be promoted because that new mother was not there when the opportunity/project arose. As much as I want to give 100% of my devotion to my job, I can be honest and say I do not. I am the one who willingly will take the day off when the girls are sick, it’s a snow week or they have an appointment.

I put most of my energies, dedication to raising my family and work has become about a paycheck. I no longer need my career to fulfill me, but fulfill the lifestyle to which we have become accustomed. It doesn’t technically make me less valuable as an employee, but I imagine it factors into a superior’s decisions on where to assign projects. I work in an office that is completely women, sex isn’t a factor when it comes to hiring, firing or giving raises. Job performance does. And I admit that my job performance isn’t what it used to be. I also admit to getting a lot more personal phone calls when I am at work than any other coworker (I’m the only working mom).

It makes sense that the single women I work with make more money than I do. They work longer hours and more days and should be compensated for their dedication.

The problem with wanting equal pay isn’t a he/she or a she/she or a he/he fight. It is more a dividing up of responsibilities. If more men took paternity leave on the birth of their child and equally divided the sick days, snow days, etc…with their partner I believe you would see a trend happening. Equalizing pay would start as men took more time off. You would begin to really see where the inequality is:

Equal pay for equal work should exist. With the caveat that experience and dedication factors into that payroll decision. The person who worked in the company and rose up the corporate ladder? That should have just as much significance as the person who walked out of college with a degree. The person (like myself) who has to take more time off of work and cannot provide the same level of intensity as their coworker? That should factor in as well.

Just don’t factor in my gender.